As humans, it’s natural for us to make mistakes, but as Muslims we should be able to give advice to our brothers and sisters who slip up, and also we must learn to accept advice from them when we are the ones who slip up. As Umar Ibn Al-Khattab (r) said:

Sincerity- Having the right intention is the most important thing. Your sole purpose of giving advice should be to please Allah and not to embarrass the person or show them that you are a better Muslim.

The right attitude – You should use kind words and avoid being rude, in other words, always be humble  .The person you are advising should not feel as if you are judging them. The main reason as to why most Muslims or people in general reject advice is because of the language used and the way it is put forth.

Secrecy – If you were to advice someone in public, it would mean exposing their faults to everyone, this sort of embarrassment is something that nobody would like to experience, so as Muslims we have to make sure that we advise our brothers and sisters in private. You can either have a private conversation with them or if you don’t know them personally an email would be a nice idea.

Don’t get angry – If the person responds in a bad way or rejects your advice, don’t get angry and just let it go, you have done your part as a Muslim brother/sister and it is up to them if they want to act upon your advice. Getting angry would contradict the whole point of giving advice.

Avoid being arrogant – Being arrogant in general will get you nowhere in life , even if a person who is 10 years younger than you gives you sincere advice , don’t be conceited and learn to listen to them for who knows , he might know something that you weren’t aware of.
Acceptance – You should understand that it is okay to make mistakes, no one is perfect except Allah, so when a Muslim brother/sister takes the initiative to correct your mistake , hear them out and open your mind so that you can realize the mistake you made so that you don’t repeat it.

Don’t be defensive – I have heard many times Muslims using the phrase “ Only Allah Can Judge Me” to run away from advice , which is absolutely wrong , it is however true that Allah is the only one who can judge, but when you commit a sin openly , you are the one who is exposing yourself to the public so every Muslim has the right to give you advice. So don’t try to justify yourself when someone has shown you proof of what you are doing is wrong.

When you are given advice, don’t just dismiss it, thank the person and work on learning from this mistake. “Allah forbids you from it and warns you not to repeat the like of it forever, if you are believers.”[An-Noor 24:16-17].

Islam is the religion of Naseeha (advice) so when we have the chance to help each other we should as it would bring us closer to each and closer to the Creator. By Uzman Muhajir 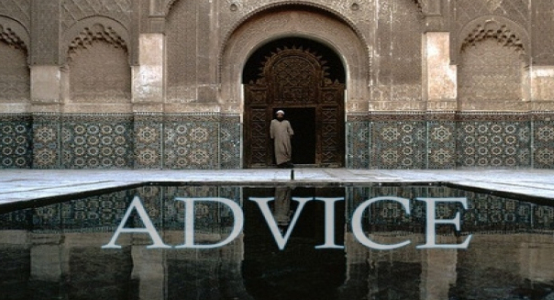