Today, we will be talking about a scientific fact, mentioned in the Quran, regarding the male reproductive system. It is important to point out that while the Quran is not a science textbook, many of the latest scientific discoveries that were revealed in Quranic passages 1400 years ago. This is in stark contrast with the Bible, which contains numerous scientific errors (due to corruption by the scribes: (Jer 8:8, Mat 5:20, 23:13). For example, regarding genetics, in Genesis 30:37-42, Jacob changes the characteristics of animal offspring by having their parents look at white stripes while mating.

FIRST
We will examine the Quranic verse that describes the location of seminal fluid prior to being discharged.
Literal translation of Quran 86:6-7:
{ (Man is) created from gushing water (which) comes out from between the backbone * and the ribs *. }
* from Al Qamoos, Lisan Al Arab, etc
In other words, just prior to gushing or coming out of the body, seminal fluid is located between the backbone and the ribs.

At first glance, a layman might think that SEMEN comes out from the testicles. While the SPERM is produced in the testicles, NEITHER is the sperm NOR is the seminal fluid (essential for natural fertilization) anywhere near them prior to ejaculation. The verse specifically mentions the entire fluid, and not just the sperm “component”. So let’s examine the process of emission, where all the components of semen are joined. Sperm is stored in the epididymis, which is not in the testicles, but above them. The Sperm which comprises 2 to 5% of the seminal fluid, , travels from the epididymis up through the Vas Deferens duct and around the bladder. Together, the seminal vesicle and the prostate gland produce 90% of the fluid in semen. This mixture travels through the prostate and is joined by mucus from the bulbourethral glands, just below the prostate.
www.webmd.com/sex-relationships/guide/male-reproductive-system?page=2
en.allexperts.com/e/s/se/semen.htm&nbsp;
en.allexperts.com/e/e/ej/ejaculation.htm

It is at this point that semen is fully formed, comprising both the sperm and the seminal fluids. As we can see, just prior to coming out of the body, all components of semen are mixed near the prostate, which is centered in the body, between the backbone and the ribs, or between the spine and the chest, which is between the back and front of the abdomen or torso, and most certainly not in the testicles or in the lower body at all.

Now let’s check the verse again.
{ (Man is) created from gushing water (which) comes out from between the backbone * and the ribs *. }
This precise scientific description could not have been known 1400 years ago, and even today most people don’t know it, as we will see next.

SECOND
We will examine some false claims regarding the scientific accuracy of this verse.

In fact, SEMEN does NOT come from the testicles. (only the SPERM is produced there, which comprises 2-5% of semen). And as we saw earlier, SEMEN IS ACTUALLY FORMED NEAR THE PROSTATE.

In any case, The Quran does not contain the scientific errors of Hippocrates view
1) That Semen comes from all the fluid in the body.
2) That Semen passes through the kidneys.
As such, contrary to DISCUSSISLAM’s misrepresentation, there is no similarity whatsoever, between this Quranic passage, and the view of Hippocrates.

Furthermore, let’s examine some more of Hippocrates related scientific errors, that are again NOT in the Quran:
1) sperm originate in the brain
2) men & women produce sperm
3) “healthy” sperm is produced by healthy parts of the body
4) stronger sperm results in males, weaker sperm results in females

IN CONCLUSION
The Quran clearly mentions the scientific fact, before it was known, about where semen becomes fully formed before “gushing” out. Semen includes the sperm AND seminal fluids, which are BOTH absolutely required for natural fertilization. The Quran accurately states that this fluid (gushing water) is between the backbone and the ribs prior to coming out of the body, as seen from the profile view of the male anatomy.

Those attempting to discredit this Quranic verse, simply demonstrate their own lack of scientific knowledge regarding the male reproductive system. In addition, trying to ascribe the numerous scientific accuracies from the Quran, to philosophers like Hippocrates, who could rarely AVOID scientific errors on any matter, is obviously quite ridiculous.

As we have demonstrated, misrepresenting both the scientific facts, and the views of ancient societies, is not only the strategy but a fundamental requirement for people attempting to refute the Quran’s overwhelming signs. 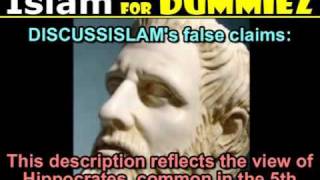